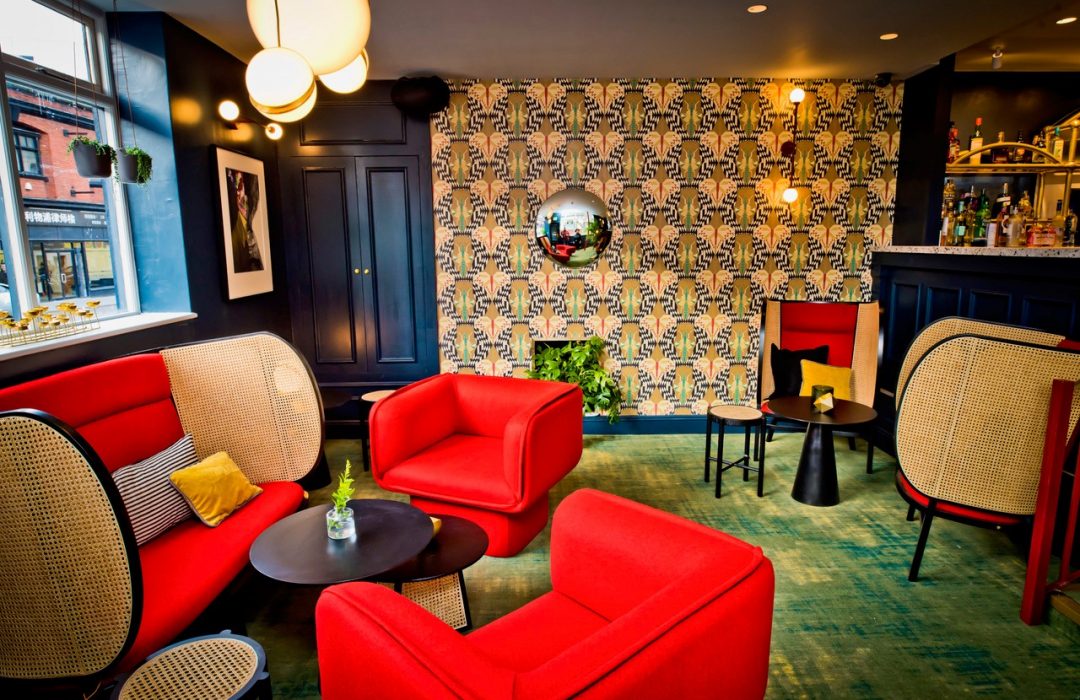 As though emerging from its chrysalis, a new pub venue in central Liverpool is set to spread its wings, as it prepares to open and welcome guests from Thursday 28 November.

‘The Butterfly & The Grasshopper’ marries the modern with the historic, in a dance of styles, weaving a web of delight and mystery.

Set on the corner of Renshaw and Oldham streets, the pub is spread across three floors of the nineteenth century building and takes its name from a fantasy poem for children, The Butterfly’s Ball, and the Grasshopper’s Feast.’

Inspiring both the venue design along with its food and drink offer, the poem was written in 1802 by MP for Liverpool and author, William Roscoe; and tells the tale of a party held for insects and other small animals, which sees them creep out of their woodland undergrowth at dusk, to dine and dance together.

Retaining an air of the historic, the ground floor of The Butterfly & The Grasshopper features a traditional public bar, the first floor houses the venue’s kitchen, whilst the second floor holds a surprise, opening out to reveal a hidden roof garden restaurant along with a cocktail and gin bar.

A rich and verdant hideaway, there’s a feeling of being high up in the leaf canopy – plants and foliage camouflage the exposed beams of the original building, and a comforting and warming fire pit sits at its heart.

Throughout the venue nature is entwined with technology – digitally printed wallpapers take their inspiration from the copperplate illustrations of botanical books which William Roscoe would no doubt have been familiar with – (interestingly the site was home to Parry’s Public Library from 1850, before it moved in 1858.)

A modernist take on Arts and Crafts, the play between styles and centuries continues in the furnishings, as Thonet chairs originally designed in the nineteenth century are juxtaposed with contemporary furniture by Patrizia Urquiola and Hay.

Velvet Belle Epoque banquet seating partners with Danish rugs and carpets, and are wittily offset by Dan Hillier’s Neo-Victorian surrealist artworks, which feature across all floors of the venue.

From an original concept and design narrative by Mike Girling, Managing Director of Old Rope Walks Limited, the operators of the new venue; the project is a creative collaboration with Simon Bottomley of JS Design who has led on the architectural design and building renovations, with interiors and brand direction by Soo Wilkinson of Igloo Design, whose other notable Liverpool projects include the original Alma De Cuba, Babycream and Nightgarden.

David has worked closely with the venue’s Head Chef Bart Kunach, (previously Head Chef at Malmaison Liverpool) in devising the intriguing menu, which takes its cues ‘From The Land, From The Sea and From The Earth.’

Focusing on simple dishes with big, bold flavours, ’From The Land’ boasts a choice of steaks, including a 24oz bone-in-rib to share, all served with a selection of sauces.
‘From The Sea,’ features Mussels presented three ways and ‘From The Earth,’ a grilled Cauliflower steak with caper, raisin and parsley relish, and grilled harissa and honey-marinaded Hispi Cabbage – which are suitable for vegetarian and vegan guests.

Eight classic and eight contemporary cocktails are at the heart of the pub’s drinks offer.

Themed around the bugs and beasties celebrated in Roscoe’s poem, such as ‘The Honeybee’ and also ‘The Dragonfly’ each has been carefully designed, with floral influences and plant nectars – all perfect to sip at.

The Butterfly & The Grasshopper now joins a portfolio of popular venues operated by hospitality group Old Rope Walks, including The Dovedale Towers on Penny Lane, The Lodge on Lark Lane both of which are in residential areas South of the city, and the historic Lion Tavern located in the city centre.

“The further expansion of the estate with the opening of The Butterfly & The Grasshopper helps to cement the company’s position within a competitive market and also demonstrates our ongoing commitment to Liverpool, and being part of the fantastic hospitality scene which the city now enjoys.”

The Butterfly & The Grasshopper is located at No. 1 Oldham Street, Liverpool L1 2SU.